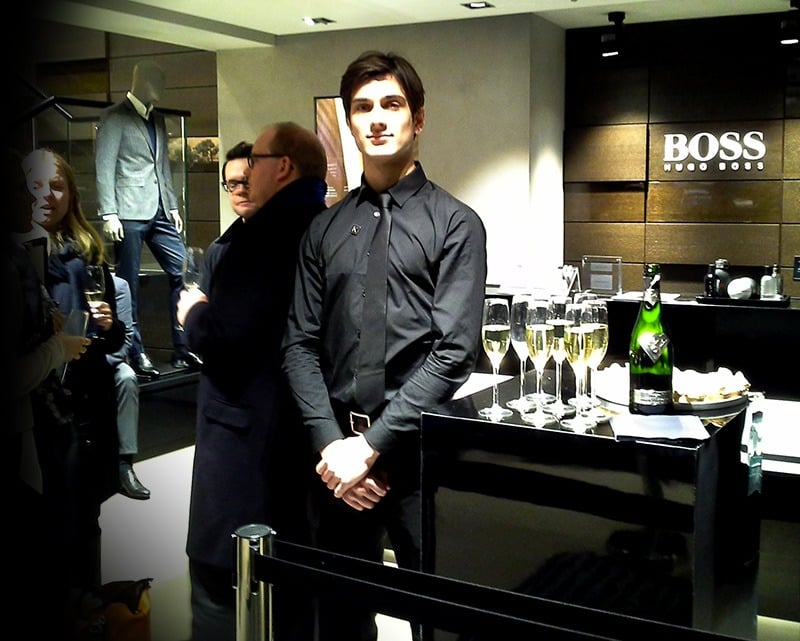 Following the success of the first ten InStyle events we did for Hugo Boss in October we got the call to help out with a series of functions that they had planned over the Christmas period. The first of which was Vendanges on Bond: an evening that combines luxury shopping with fine wine and champagne. In the spirit of the evening, Boss had organised with us that every shopper should be greeted with a glass of Gout de Diamants champagne and a mince pie. We had two staff working the shop floor all evening ensuring that there was never an empty glass, and that everyone who came in to buy clothes got treated like royalty. We even saw the likes of Dale Winton pass through the doors and do his supermarket sweep of the shop floor clutching a glass of champagne.

This event was to set the theme for the majority of the Christmas activities that we helped Boss out with; they decided that the event had gone so well they ought to provide the same service on the traffic free day in Regent Street. With the sort of volumes of people that pass down Regent Street it was decided that we should serve champagne and mince pies for 4 hours through the afternoon while people came in to browse the store. So we put three of our most presentable staff on and left them to host the shoppers. Again the afternoon was a great success, and one couple even spent £5000 whilst being treated to five star service. Again on the back of this the powers that be decided that their new store openings should be given the same sort of treatment; so we were sent to Nottingham, Edinburgh and Belfast to carry out the same sort of evenings, all of which were received brilliantly.