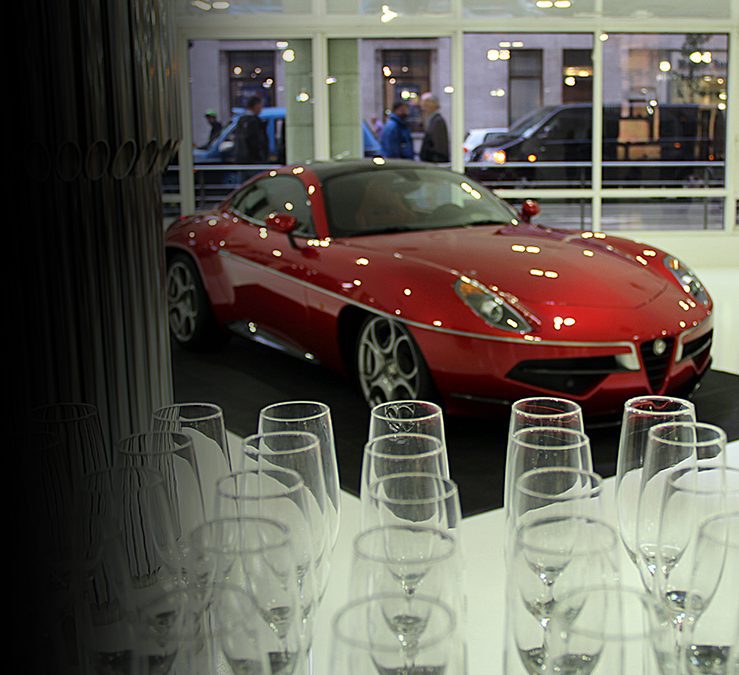 When you hear the words “Alfa Romeo” what does it conjure up in your mind? Maybe the image of some of the most iconic looking cars ever made, or maybe the unrivalled thrill you get from driving them. Whatever you think of I can bet it’s a far cry from what we were lucky enough to witness at an event we recently did for them.

Normally you wouldn’t associate alcohol and cars together for obvious reasons, but a car as spectacular as the one we saw deserved champagne flowing at its unveiling. The “Disco Volante” or literally translated “Flying Saucer” was first shown in 2012 as a concept car, but we were lucky enough to witness the first actual Disco Volante produced. Based on their iconic 8C Competizione Supercar, of which only 500 were produced, it was like nothing we had seen before. The grand presentation was set to take place at Alfa Romeo’s Wigmore Street dealership in Marylebone, a fantastic central location that was easy for all to get to.

So what was our role on the night? It was simple, working alongside Aldo Zilli and his team of very authentic Italian chefs and waiting staff, we simply had to keep the 125 VIP’s fed and watered for the duration of the evening. Serving an array of drinks from Prosecco and Italian wine all the way through to cocktails containing Limoncello from the island of Capri it was set to be a very Italian evening.

As the guests arrived our two lovely waitresses greeted them with Prosecco while our waiter walked round ensuring glasses were never empty. Once all the guests had arrived our four bartenders begun serving drinks from the hand-selected menu chosen by those in charge of Alfa UK. While the guests wandered round the covered car, eager to see what lay underneath our flairer Chris kept them entertained throwing full bottles and tins, only stopping every now to pose at the request of the photographer.

Around 8.30 service was interrupted while the magnificent car was unveiled and speeches were given explaining the path taken to reach the point of producing such a machine. Once the focal point of the evening was complete attention was back on us, and people seemed keen to make the most of the free bar and canapés kindly put on by Alfa Romeo.

The evening ended around 11pm, and all the guests made their way home by public transport……………