Wedding fit for a Princess 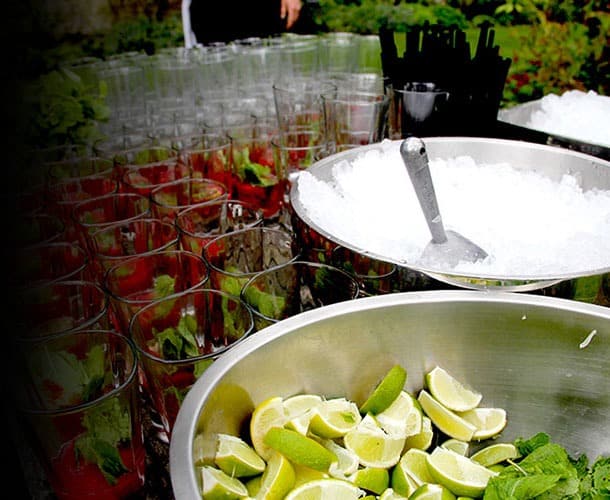 A few months ago we received a call requesting a quote for a wedding that was to take place in the grounds of a castle in the heart of the Cotswold’s. Once the quote was sent we heard nothing for a couple of months. Much to our amazement, about six weeks before the wedding the phone went, it was the mother of the bride asking if we were still available for the big day and whether we’d be able to help out. Naturally we were flattered to be asked and said yes immediately.

We were told we would need to be there for the whole day; not only serving drinks for the evening party, but also to put our own twist on the champagne reception after the service. As soon as we arrived it was clear that the bride had gone all out on creating the wedding every girl dreams of; the castle was stunning, the wine and champagne selection was impeccable, and the entertainment was second to none.

As the 120 guests flooded out of the church they were greeted by a vintage wheelbarrow loaded to the brim with magnums of Pol Roger champagne on ice, glasses of which were being handed out on trays by an army of waiting staff. Right alongside were trays of our carefully made raspberry mojito’s and an encouraging number of the guests hit the cocktails early.

After two hours the guests were ushered in for dinner, this was our cue to prepare the bar for the evening. The colour theme of the wedding was ‘raspberry’ so we prepared all the ingredients needed to make a plethora of beautifully pink drinks while the guests enjoyed their food and sipped the accompanying vintage wines.

Once the speeches were done we were open for business and the guests wasted no time in ordering cocktails. Our bartenders didn’t move from their sections for the best part of two hours, constantly serving drinks at the guests. The band providing the entertainment for the evening were brilliant, performing an array of covers without massacring any of them. The only interruption to their set was a surprise performance from string quartet “Bond”, which was a performance that I don’t imagine will be forgotten in a hurry, Stunning… The music wasn’t bad either.

As we packed up and the guests left the bride came and offered us her thanks; a gesture that made the whole day all the more rewarding.