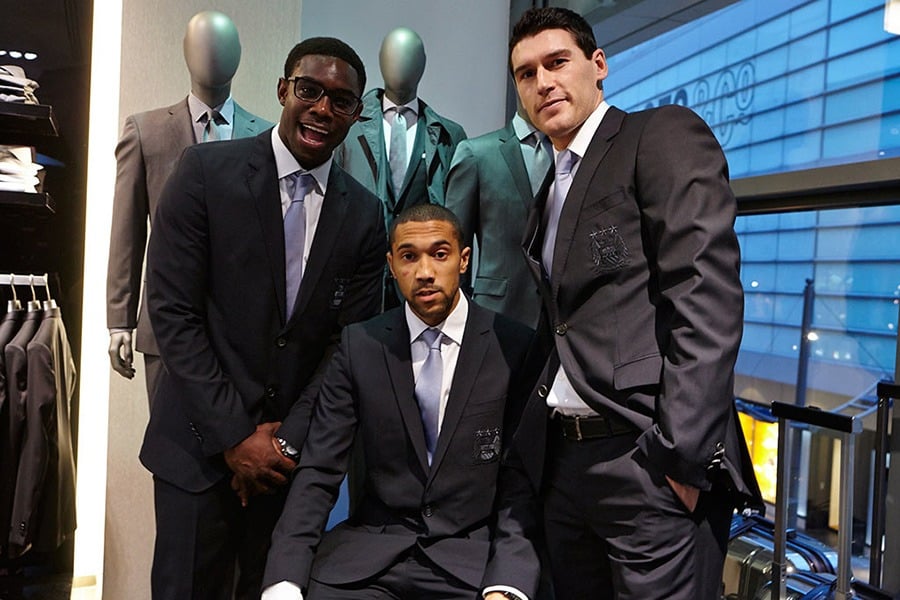 Following the success of the ten “InStyle” events that we did for Hugo Boss in October of last year they asked if we would be prepared to travel to Manchester and help out with a function that they were doing with Manchester City Football Club. As one of the club’s official sponsors they were hosting an evening where the fans could come and meet some of the players in store and get their shirts signed.

Just to ensure that all the guests were properly looked after they’d asked us to provide a bar serving beer champagne and soft drinks, as well as a selection of ‘stadium snack’ themed canapés. Once again we used the Gout de Diamants champagne that had gone down so well at the previous ten events, and supplied the guests with Amstel lager; it’s no coincidence that Amstel are also an official sponsor of Manchester City Football Club.

Shortly before the doors opened the players arrived; the selection included Gareth Barry, Gael Clichy, Joe Hart, Micah Richards, Jack Rodwell. Once the guests were let in they were allowed upstairs in small groups to meet their idols, and have their photos taken. While the kids (and some adults) flocked to the footballers most of the older generation found their way to our little champagne bar in the corner. It seemed as though Boss had catered for everyone’s needs. The mini burgers and pies seemed to go down well with the fans too.

Naturally on an evening like this there was going to be photographers taking pictures of everything they could. But little did we know that they would even be taking photos of us: in fact we even found our way into “The Gent” magazine a couple of weeks later…